While an industry White Paper on spectrum demand is being offered to support the accuracy of FCC’s spectrum demand projections used in its National Broadband Plan, the data actually shows just the opposite.[i] It is difficult to ascertain the exact numbers in the graphs in the paper. However, comparing the actual numbers in the FCC projections to the actual numbers published in the CTIA’s Annual Wireless survey, it’s clear the traffic growth was slower than expected: 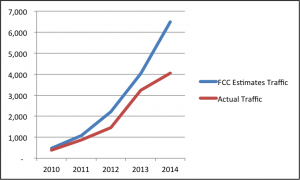 As shown above, actual traffic was 37% lower than the FCC estimates on which that National Broadband Plan was based.

FCC Was Even More Wrong on Need for Spectrum

In 2010, the US wireless industry was using approximately 170 MHz of the 547 MHz allocated to wireless broadband. [ii] The FCC projected it would need to augment the existing supply of mobile broadband spectrum by 275 MHz, to 822 MHz by 2015 to meet expected demand. [iii] It rounded this figure to 300 MHz or 847 MHz, a number that is part of the National Broadband Plan.

The FCC missed its targeted 300 MHz of new spectrum, adding only approximately 98.5 MHz net, [iv] bring the total mobile broadband allocation to 645.5 MHz. But wireless companies don’t seen to be pinched for spectrum. They’ve been restoring unlimited data plans and rolling out new advanced networks, while, according to the CTIA’s recent survey,[v] reducing the number of cell sites since last year. Moreover, the industry is only using 348 MHz of spectrum as of the end of 2014[vi] – about 200 MHz less than what was available in 2010 when the FCC issued its urgent cry for an additional 300 MHz by the end of 2014.

To put this in perspective, the FCC projected the wireless industry would need approximately 266% more spectrum than it has proven it needed by yearend 2014![vii] These results transpired despite the fact that cell site growth was lower than expected (about 4% annual growth vs. 7% projected by the FCC and negative cell site growth between 2013 and 2014). The decline in cell site growth suggests the industry is well within it comfort of handling current traffic.

The table below shows the impact of the traffic estimates and the spectrum utilization efficiency:

How did this happen?

How could the FCC get this so wrong? Several possibilities:

How Do we Square Lower Demand with High AWS-3 Auction Prices?

It’s difficult to square the lower than expected traffic growth and even lower spectrum utilization with results from the AWS-3 auction. The AWS-3 auction generated approximately twice the revenue as high-end estimates or $2.65 per MHz/PoP for the paired spectrum. There are a few possibilities – all revolving around DISH. DISH needs a partner to help develop is spectrum, as the build out deadlines for its AWS-4 spectrum approach. It may have targeted critical areas where other operators, particularly T-Mobile, needed spectrum in order to thwart them so as to gain leverage in encouraging them to partner with DISH. Another possibility is that operators were equally determined to limit the amount of spectrum DISH acquired, as they did not want DISH, as a new entrant, to wreck havoc on the US wireless market in the way Iliad did in France. It’s clear something, or some combination of factors was strange, private market transactions at about the same time did not have such premiums with AT&T paying $1.85 per MHz/PoP for theoretically more valuable 700 MHz spectrum a year earlier or Ntelos’ sale for PCS spectrum to T-mobile for about $1.07 per MHz/Pop.

As we’ve discussed elsewhere, regulators have frequently relied on biased demand projections.[viii] Spectrum is an irreplaceable national asset. In addition to its market value of tens of billions of dollars in a single auction, it has economic impact of many multiples of that as well as difficult to measure quality of life implications including access to healthcare, education etc. Its management is policy issue that simply too serious to leave to outdated forecasts that we know are wrong by a factor of hundreds of percent.